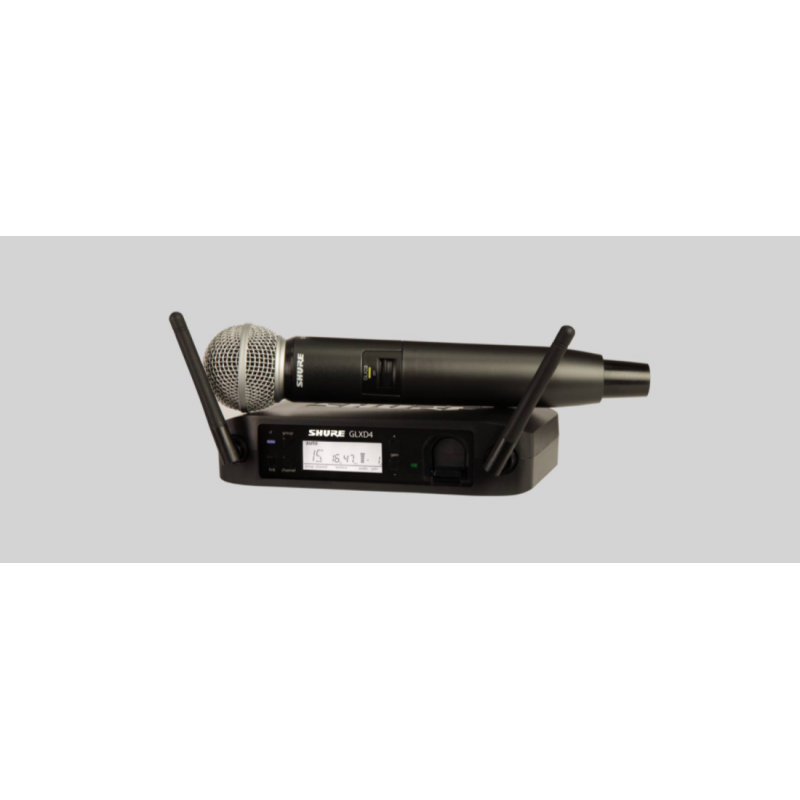 The hand transmitter GLXD2 with the SM58 microphone capsule is a dynamic microphone with cardioid characteristics, with a frequency range between 50 and 15,000 hertz. The characteristic diagram is characterized by deviations. The microphone-transmitter is equipped with a lithium-ion battery, a MicroUSB type connector for i.a. battery charging and TA4F four-pin mini connector. On the GLXD2/SM58 panel there is a transmitter power button and an LED indicator that informs about the battery status. GLXD2 automatically connects to the wireless receiver.

The GLXD4 wireless digital receiver supports up to 8 compatible channels on one band, and the 24-bit LINKFREQ system is responsible for automatic identification and selection of the best frequency for the transmitter and receiver. The front panel has an LCD display that informs about i.a. transmitter battery status (accurate to one minute), group or channel. On the right side, there is an integrated transmitter's battery charging port.
The rear panel of the GLXD4 receiver with a half-wave dipole antennas offers a three-pin, balanced XLR microphone output, a balanced 6.3-mm jack for instruments and a MicroUSB socket.

The maximum output level on the XLR connector is 1dBV (at 600Ω load), and on the 6.3mm connector at 3kΩ load, the result reaches 8.5dBV.