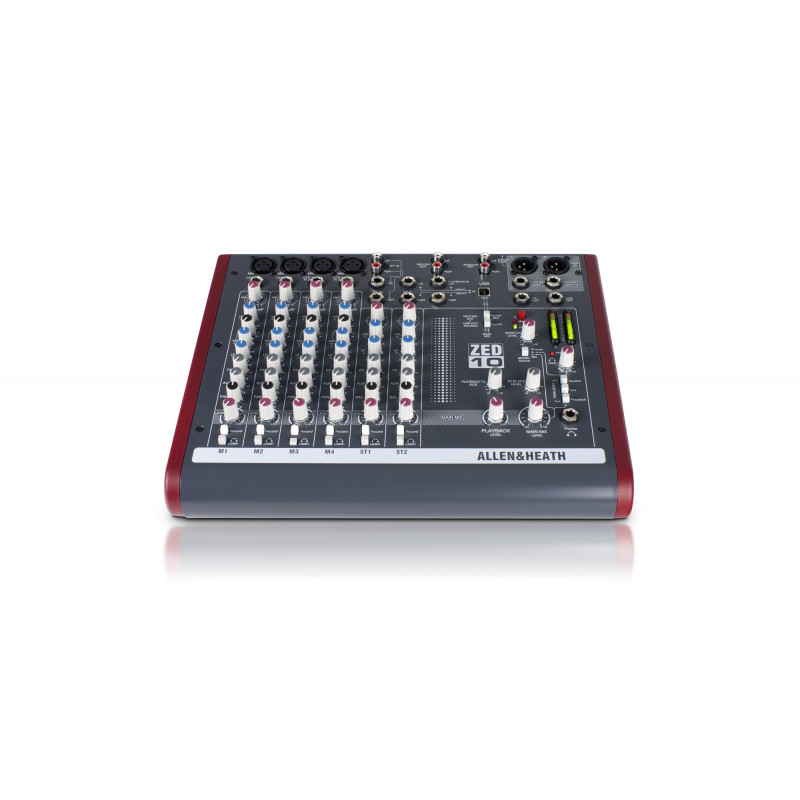 The monophonic part of the compact mixer panel is equipped with four, three-pin XLR microphone inputs, two TRS line inputs with a diameter of 6.25 millimeters and two unbalanced line inputs of the same diameter, which are intended for connecting a guitar or other instrument.

Below the inputs are two-scale gain controls that allow you to adjust the microphone source from 10 to 60dB and the line/Hi Z source from -10 to 40 decibels. Nextly, there are high-pass filters (100 Hz) and three-band equalizers with fixed values ​​of 12 kHz for high frequencies and 80 Hz for low frequencies. The middle frequency band is controlled by an independent equalizer that allows tuning in the range of 120Hz to 4kHz. The correction range is +/-15dB.

The next knobs are used to adjust the FX level, AUX track, panorama and volume balance for each channel.

In the stereo section of ZED-10, we have unbalanced RCA line inputs (for audio players) and 6.25-mm jack line inputs. Below, there is gain control and two-band HF/LF equalizer. The rest of the panel is the same as for the mono part.

In addition, the user has access to a two-way USB-B connector, which allows simultaneous recording and playback of materials. ZED-10 also offers the option of phantom power (48V).

The Allen & Heath ZED-10 mixer available at SQM Rental House is a compact and mobile device that can be used both in the studio and on the stage. The mixer weighs slightly over 3 kilograms.